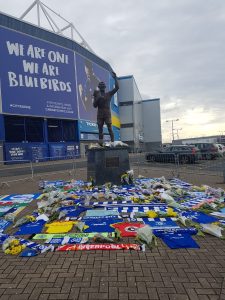 Trust Board Member Tim Hartley has written an article about the reaction to the tragic plane crash involving our new striker Emiliano Sana. Tim details responses from a selection of supporters’ groups at other Premier League clubs.

Maybe it is too soon after the event to make any sense of the tragedy of the possible death of Emiliano Sala. Perhaps we never will.

What we do know is that everyone associated with FC Nantes, Cardiff City FC, indeed the whole football family, are grieving the loss of a young man who was at the top of his game and was genuinely excited about joining his new teammates in the Premier League.

Fans have put aside any rivalry they may have had. The game of football, our club’s prospects, new signings and the fear of relegation have all taken a backseat while we share a common grief.

Few in Cardiff had ever seen Emiliano play but we still feel the pain his family and friends in Nantes and Argentina must be feeling.

We at Cardiff have been here before this season. After Leicester City’s owner, VichaiSrivaddhanaprabha, and four other people died in a helicopter crash, the Foxes’ first game was against Cardiff. There was an outpouring of sympathy as supporters exchanged flags and players and staff from both clubs joined together in an emotional tribute.

It has been gratifying on the loss of Emiliano and his pilot to have received condolences and messages of sympathy from so many supporters’ groups. The coming together of the ‘football family’ may sound something of a cliché but as the selection of messages from fellow fans below shows, when the chips are down, it is very real and we are truly grateful for it. 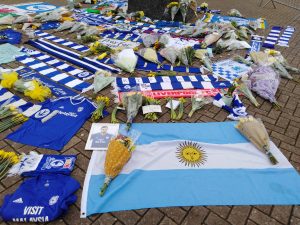 ‘The thoughts of all our members are with Cardiff and particularly Emiliano’s family.’ Watford Supporters Trust

‘Thoughts with his and the pilot’s friends and families. Also thoughts with Cardiff City and their fans who were so generous to Leicester under similar circumstances.’Foxes Trust

‘So many loses this season. Our thoughts and good wishes go to all those at Cardiff City FC. We stand with you at this difficult time.’ West Ham United Independent Supporters Association

‘Please take on board the thoughts and commiserations from all at Brighton & Hove Albion Supporters’ Club – our support goes to all at Cardiff City FC, and the families involved: Emiliano and the pilot are in our thoughts together with the players and officials at Nantes who will be hurting just as much I am sure.Take care everyone – we need each other at times like this.’ Brighton & Hove Albion Supporters’ Club

‘It is difficult to put into words how to express our thoughts. This isn’t about just football, it’s about the lives of all of those on board, their friends and family.’Manchester City Supporters Club

‘This is a truly dreadful incident and is terribly distressing. We’ve always received such a warm welcome from our friends at the Cardiff City Supporters’ Trust every time we have visited and please let us know if there is anything we can do at this difficult time.’Fulham Supporters’ Trust

‘Our thoughts and prayers are with you, our fellow football fans at Cardiff, Emiliano’s family and the Nantes supporters and staff. We can’t imagine what they must be going through.’ Arsenal Supporters Trust

‘The thoughts and prayers of the Clarets Trust are firmly with the Cardiff football family and in particular to those close to Emiliano.’Clarets Trust