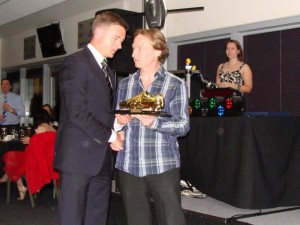 He was presented with “golden boot” by Trust chair Tim Hartley during the ceremony at the Cardiff City Stadium.

Turner’s dramatic late equaliser against Liverpool in the Carling Cup Final scooped the award for Moment of the Season. It was presented by Trust vice chair Tracey Marsh on behalf of the CardiffCity.com Internet Mailing List.

Peter Whittingham won the Supporters’ Club Player of the Year, beating rivals such as Ben Turner and Joe Mason to the main prize, although Mason was awarded the Young Player of the Year award for his outstanding performances this season.