Bluebirds fan Gareth Jones has organised a race night with all proceeds to the Fred Keenor Statue Appeal.

The event  kicks off at the Golden Lion in Penarth on Sunday, November 27th, immediately following 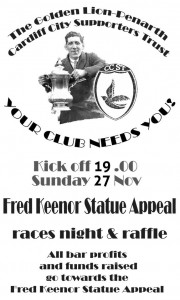 the screened Premier League game between Manchester City and Liverpool.

Gareth Jones, 34, who lives in Penarth, said:  “I’ve been a City fan for more than  20 years and a supporters’ trust member since it began.

“I decided to offer my help with an event after attending a supporters’ trust night in Canton earlier this year. Having seen the amount of work Trust members put into these, and other events, I felt obliged to offer my help.

“There’s a large contingent of City fans in Penarth and I thought we’d be able to combine a few of our favourite pastimes in one place for a good cause – beer, a flutter and Cardiff City.

“Keenor is synonymous with our history – not just as a football club but as a city. We’re the only club to have taken the cup out of England, and to raise the funds as fans for a statue is a very fitting tribute to Fred Keenor – a truly great Cardiffian.”

Apart from Gareth we’d also like to thank landlord Paul Harper and Jon Bassett, a great supporter of the Keenor appeal, who owns the Golden Lion as well as the Ninian Park pub and other local pubs.

David Craig, project manager of the appeal, said: “I’d like to offer my personal thanks to Gareth, Paul and Jon for putting this event on. It should be a great night following a day of Premiership football.

“We need more people like Gareth to organise events because we are only a small band of fundraisers. Please email fundraising@ccfctrust.org if you’re willing to help out.”