Gill Clark, wife of Bluebirds legend, Brian Clark, unveiled the new  sign dedicated to his memory in the road leading to the Capital Retail Park, next to Cardiff City Stadium.

Councillor McEvoy, himself a Bluebirds fan, described Brian as a true City legend and Gill Clark thanked the council for naming the road after her late husband. 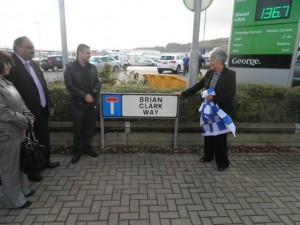