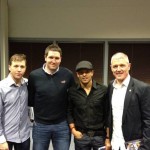 The Trust hosted an evening at the Cardiff City Stadium to mark the 10th anniversary of the FA Cup triumph over Leeds United.

Four of the players from that day were in attendance – skipper Graham Kavanagh, Andy Legg, Scott Young and Robert Earnshaw, who are pictured.

More than 250 fans turned up for the evening with BBC Radio Wales soccer commentator Rob Phillips asking the questions.