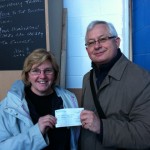 Coach operators who collected from fans travelling to the Carling Cup Final raised a magnificent £4,237.30 for the Keenor statue appeal.

Cardiff City Supporters Club (CCSC) spearheaded the initiative and independent coach operators quickly got on board. And other people who organised their own buses from pubs and among friends also chipped in.

A £1 was added to coach fares for the statue appeal by many operators while some gave donations.

The contributions the appeal has received so far from the coach operators are:

David Craig, the appeal fund’s project manager, said: “We are absolutely thrilled at the success of the £1 for the Keenor appeal and would like to thank CCSC , independent operators and ordinary fans who just organised a bus to Wembley. You have been brilliant.

“We now need under £15,000 to achieve our dream of a permanent tribute to one of Wales’ greatest sporting legends, Fred Keenor.

“The artist, Roger Andrews, who created the Sir Tasker Watkins statue outside the Millennium Stadium, is well advanced on the statue and we hope to be to show progress through the media shortly.”

Details of how to make donations to the appeal fund through the bank can be obtained by e-mailing fundraising@ccfctrust.org

Donations can also be made at the Trust office (near Gate 5) on match days while cheques can also be sent c/o CCST to PO Box 4254, Cardiff, CF14 8FD.