Malky and Skipper Hudson ‘lord’ it in London 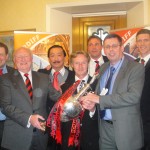 Malky Mackay and Captain Fantastic Mark Hudson joined MPs at a reception in the House of Lords to celebrate our promotion to the Premier League.

The host Lord Neil Kinnock spoke of how long he has waited for this moment of triumph. He said he was now looking forward to ‘Y Clasurol,’ our own Welsh ‘El Classico,’ between Cardiff and Swansea next season.

Trust chair, Tim Hartley, spoke to club owner Vincent Tan about the results of our fans survey though he was told there would be no change from the club’s current branding.

It was good to hear Lord Kinnock and Vincent Tan mention the Trust by name. They both praised the fans for their fantastic support during the season and Kinnock singled out the Trust’s success in getting the Fred Keenor statue completed.