Looking Forward To The Premier League, With Praise For Neil Warnock 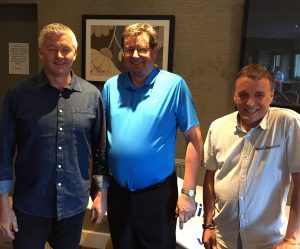 They were full of praise for work of manager Neil Warnock and his transformation of the club from relegation strugglers to promotion, describing it as an unbelievable achievement.

Rob stressed that fans needed to be realistic about the new season. “It will be a question of ‘can they get results the way they play and can they cope with big defeats that will inevitably come?’ “You will have to get used to losing more,” he told Trust members.

“The questions are ‘can they pull off a marquee win, can they beat those around them’? Teams will not want to concede throw-ins and corners against Cardiff City. Cardiff City may not be pretty but they impose themselves on you.

“People will say they cannot survive in the Premier League the way they play but you never know. Finishing 17th would be a huge success.”

He noticed the atmosphere at the club was completely different from the previous Premier League promotion. “I do think the feeling was different after the Reading game compared to the Charlton promotion game. Neil Warnock is good at managing up which is important for his relationship with the owner and has brought everyone together.”

Jason said that loan signings would be massively important and he thought Josh Murphy, the speedy signing from Norwich, could play an important role under Warnock. “Warnock will be looking for more and better players who can play his style.”

Jason praised squad players like Matt Connolly and Anthony Pilkington, who often sat on the bench. They made an impact when they came on as Pilkington did scoring the equaliser away against Sheffield United while Connolly never let anyone down when called on. The strength of the squad would be key, he stressed.

The former centre half also highlighted the often underrated defender Lee Peltier, who he felt would have a part to play, although he does not get forward as much as others. “He loves a tackle.”