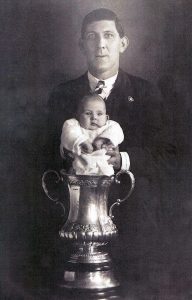 His daughter, Veronica, contacted the Trust last night with the news. Bryn was 90.

As a baby he was famously pictured in the FA Cup trophy, held by his father.

Bryn was the last surviving child of the legendary Bluebirds skipper.

Trust chair Keith Morgan said: “The Trust wishes to express its condolences to Bryn’s family and friends  at this very difficult time.

“The picture of Bryn in the FA Cup was iconic and probably one of the most famous images in the history of the competition.”

In November it will be the sixth anniversary of the Fred Keenor statue being unveiled at the Cardiff City Stadium. The Trust led the appeal to raise the funds for the statue, supported by fans and organisations.