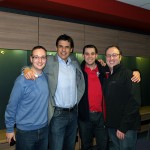 The home dressing room at the Cardiff City Stadium was the scene for a question and answer session with Wales manager Chris Coleman, which had been arranged by the Trust.

Trust members quizzed the Wales manager and FAW Public Affairs head Ian Gwyn Hughes in the latest of a series of roadshows and events across Wales as the football association builds better grassroots links with fans.

Coleman was happy to answer questions on any subject and spoke about the impact of Gary Speed’s death on him and the Wales team, Gareth Bale and Aaron Ramsey and the difficulty of being an international manager in terms of getting players released by clubs while trying to avoid upsetting clubmanagers.

Questions were also raised about Wales players being made available to meet supporters – particularly younger fans – the use of a rugby stadium, the Parc y Scarlet,s for Wales games and the lack of matches in North Wales, which it seems is due to the fact that Wrexham’s ground is not up to standard for international matches. 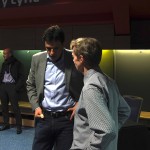 After the session, Coleman posed for photos and signed autographs.