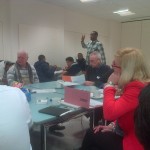 The volunteers hear about the project

The Trust and the Cardiff Story Museum have launched an oral history project to record memories of fans going down the City over the ages.

Sixteen volunteers attended the first session at the Old Library and a series of themes to be recorded were discussed including traditions, songs and chants, fashion, attending matches for the first time, working lives and diverse communities.

By the summer it is hoped the volunteers will have recorded a body of history on what the club means to the community of Cardiff and South Wales. The idea is to celebrate the history of Cardiff City and the impact the club has had on people’s lives and across different generations.

Trust Chair Tim Hartley, who attended the session along with vice-chair, David Craig, said: “This is an exciting project and it was great to see so many volunteers at the launch event.

“Supporters will be interviewed about their stories on what the Bluebirds means to them and it will be great to have fans’ memories recorded for enjoyment by future generations.”

The Cardiff Story will train and support the group of volunteers with a view to the helpers passing on their knowledge and skills to future volunteers ensuring it becomes an ongoing project.