In a friendly, positive question and answer session, TG talked about his hopes for the Bluebirds, revealed that he did not take a penny as chairman and said that Malaysian investment in the club had now reached £11m. 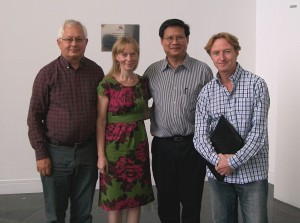 Here is what TG had to say:

TRUST: How did you become involved in Cardiff City?

My son Nicholas wrote to football clubs in the UK for trials. He got a reply from West Ham United so he did a stint at Upton Park, then he got a reply from Stoke City and a few other clubs. Cardiff City was one.

I wanted to come and visit him when he was doing his stint and I visited him at West Ham where I met Gianfranco Zola and he played a closed match in the West Ham colours at Leyton Orient.

Then Cardiff invited Nicholas down for a trial. I came to Cardiff. This was my second time in the city because when I applied for university, Cardiff was one of my choices. I came to Cardiff Law School to look at it. I always remember that it was a beautiful country but I went to Warwick to read law.

TRUST: You had no thoughts of investing when you came to Cardiff to see your son?

Absolutely none.  I remember watching my first game against Preston North End at Ninian Park. My first club contact was Alan Whitely (director) through another Welsh friend of mine. I watched the match and thought, wow! The second match I watched was at the new stadium.

We took a watching brief and I thought there was some basis for investment so I invited Peter Ridsdale and Alan Whitely out to Malaysia for talks. I realised this club needed help so Tan Sri Vincent Tan and I gave a loan of £2m – it is a lot of money to put into a club which we really didn’t understand at the time. For some reason, I felt some connection. I thought ‘let’s help this club’.

Then I saw that the club was heading towards the possibility of the play-offs and I met up with some of the players and Dave Jones. We needed to support this club to see if we could get through. The other alternative would be that the club would have gone down.

We decided to do it and decided to support this club and see how we go at Wembley. All of us were heartbroken but we kept to our word.

We subscribed to the shares five days after Wembley. In fact, a lot of people had thought, ‘Gosh, are we going to pull out’?

TRUST: How does the Bellamy deal work?

Dave Jones came with a plan. We had two options. If you strip back on the playing side then all your other revenues will also slip away. You won’t get the season tickets, sponsorship etc. The alternative plan is to go for it while trying to get the business back on a sensible footing.

Cash flow is an issue going forward. TG and Vincent Tan have come to the fore. Since the time of John Toshack, Cardiff has always sold its best players and sometimes at the most inopportune times. If we kept the starting 11 from last season and added to it we thought we could genuinely have a team that could compete.

This is a very competitive league. There is a better chance this year given the financial problems faced by two of the teams coming down from the Premiership – Portsmouth and Hull.

We have got fewer players than last year but we have better players and the budget is the same, except for Craig Bellamy, and we are pretty sure the deal will pay for itself.

We would not have sold out our home tickets for Doncaster or Hull if Craig had not come in. We have sold nearly 500 season tickets since Craig came and the replica shirts are selling well.

After the Hull match we had to stop people coming into the shop because there were such queues. I went into the shop, went behind the counter, took off my jacket and started wrapping items for seven minutes before I was told that running the shop was not really my forte!

Yes, absolutely. Most people there still follow Premiership teams but we want to get there too and I am reserving the tour to Malaysia for the ‘second wave’ of our push for success.

We get players we can afford. We were lucky with Craig Bellamy where we were in that window and everything worked out. Ordinarily, when I walked into the shop after the Hull game I remarked that one month ago I could not have imagined shirts in Cardiff colours with Craig Bellamy’s name on them. But I must caution that we are still very much facing an uphill challenge. There are legacy issues and you can’t just extinguish the problems of the last five or six years of history. I find we have to do quite a lot of mending – to get back the confidence of the business community. It’s not just about getting a football team up, it’s about getting your integrity and dignity back. And that’s been a hard part of the job.

TRUST: What about corporate sponsorship and support for the club?

We have to go out and engage with the city, the council, South Wales, with the public and businesses. When we have shown them we can handle ourselves properly and sensibly then we can ask them to engage with us. We have also got to reach out to bigger companies and, if that’s not in South Wales, we have to expand our horizons. We have moved the business onto a sensible commercial footing, doing the ticketing properly, the shop and the website, and we are giving all these areas of the business attention. We also need to get the venue used more frequently – for example even events like the Ricky Tomlinson night.

TRUST: How long do you expect to be involved in Cardiff City

I hope longer than my stint at the club shop! The guy at the counter was nervous because he knew I was watching him – so I said ‘sack me!’ And he did!

Tan Sri Vincent Tan and I have put in 11 million reasons for sticking around. We see things turning around – that’s for sure. At the end of the day we only have a certain percentage of the company but we do shoulder a lot of responsibility.

We went through the joy of getting to Wembley and the pain after that defeat. We have shared a lot of that and we feel a sense of belonging. Our decisions are based on sound business. We can’t just open a cheque book and sign. Every penny spent and every step moving forward is not taken for lightly. It is like being in the trenches. Every yard forward costs us a lot and we must be aware of what is happening around us.

If fans can see the light and support us in their own way by coming to watch matches or lining up to buy the jerseys and continuing to support the club, which I know they have been doing for a long time, then I can’t see why we can’t get there. But if we are taken for granted, I would be the first to say that it is untenable.

If decisions are made properly, and we move forward positively in terms of its business and serving the community, then I think we will stick around.

Dave Jones is central to our plans. On the other hand so is Gethin Jenkins, so is Doug Lee (finance director). He manages our funds as if they were his own! When Olofinjana scored I think Doug thought, ‘I hope it brings us more revenue’. We need someone like him to make sure that we are not spending silly money on silly things.

I have a manager who is now looking at getting us up there and I don’t want him thinking of anything else but that. Gethin is tackling the problems of the past and I will support him all the way because he is doing the right thing.

TRUST: How much time do you plan to spend in Cardiff?

I would love to spend as much time as possible here but it is not always possible. You know I need to work hard to earning some money. For key matches I’d like to be here. I still haven’t watched Craig Bellamy play.

My son Nicholas took a year off to play football and has just finished his A levels. He has offers from UK universities to study. He wants to do environmental sciences but has also applied to Australian universities because he is thinking of perhaps playing football in Melbourne. I don’t know what he will do. I have told him that ‘if you are harbouring a dream of playing for Cardiff you have to make your mark in your own right,’ and he would not expect anything else.

TG said that he would be happy to meet Trust members on his next visit.