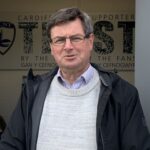 The Trust has written to MPs in south Wales, as it is almost a year since the Fan-Led Review of Football led by Tracey Crouch, MP, was completed.

We have asked for their support to ensure legislation is enacted in the wake of media speculation about whether the Westminster Government intends to honour the commitments made by former Prime Minister Boris Johnson MP.

It would, to say the least, be hugely disappointing if the UK Government was to renege on this policy now, given it was a manifesto commitment in the run-up to the 2019 UK General Election.

As fans will be aware this issue was brought forward in response to the proposed European Super League and the review was carried out by the respected Conservative MP, Tracey Crouch, herself a previous Minister for Sport. It won universal acclaim, including cross-party Parliamentary support. Only those vested interests which it threatens questioned the need for it.

It was somewhat reassuring, therefore, that the current Minister for Sport, Stuart Andrew, recently made time to meet with a delegation from the Football Supporters’ Association. The FSA was able to make a very strong case for why implementation of the Review must carry on at pace.

Mr Andrew later confirmed that implementing the main findings of the Review remained Government policy and that he remained committed to a White Paper in the autumn. Whilst this is helpful, the full implementation of the Crouch report will also require legislation to give it teeth, especially given the dismal track record of the FA and the leagues in properly regulating the game over a very long period.

The health of the English pyramid remains under threat – at least one Premier League club remains in danger of a breach of financial rules while at least three Championship clubs are facing difficulties of various kinds. League One club Morecambe may well be affected by the failure of Rugby Union club Worcester Warriors, as both are owned by the same business group.

There is no sense that any of these problems are being dealt with decisively – or will be. Nor is there a sense that there is any appetite inside the game to tackle the problems caused by the gross inequalities in revenue distribution. We need wholesale reform, and we need the help of our MPs to make sure that it actually happens.

The Trust has asked them to lobby key figures within the UK Government on our behalf and offered to meet local MPs at any time.