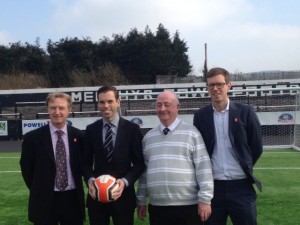 Trust chair Tim Hartley joined the Deputy Minister for Sport, Ken Skates, to launch a study to look into the potential of Supporters Direct establishing a full-time presence in Wales.

SD offers guidance to supporters who want to take over sports clubs in their communities. It is already working with trusts in Wales, but with the financial backing from the Government it is investigating whether its work can be introduced more formally in Wales.

Speaking at the launch at Merthyr Town FC, Ken Skates said, “Sports clubs can play such an important role in regenerating an area and creating a sense of community solidarity. It is always a great disappointment when any area loses a club, which is why the guidance Supporters Direct offer is so valuable.”

The Cardiff, Swansea and Merthyr Supporters’ trusts and the Welsh Premier League joined together to lend their support for the study. Mr Skates added, “It’s great to see the positive developments at Merthyr Town F.C. and I’m sure they would agree that the invaluable guidance offered by Supporters Direct has played an important role in the club’s development.”

Tim, who is also a director of Supporters Direct, said, “We know that sport brings people together and how important rugby, football and hockey clubs are to our communities.  Having our own SD Cymru is an exciting prospect. This study will help us identify how best to ensure all kinds of sports clubs remain true and sustainable community assets.”