Should safe standing areas be provided in stadiums for fans? That was the topic under discussion on Tuesday when the Trust hosted a roadshow at the Ninian Park pub in Cardiff.

Jon Darch from the Football Supporters’ Federation brought seating from Stuttgart’s stadium in Germany to show how it might work if given the go-ahead in the UK.

The seats – known as rail – are made of robust metal with a high back forming a sturdy rail for safe standing and are widely used in the German Bundesliga. At German champions Borussia Dortmund there is standing for 27,000 fans, one third of the stadium’s capacity.

Jon, who has taken his roadshow to a dozen stadia and venues across the UK, said: “All we want is for fans to be able to watch football the way they want to – be it sitting or standing.”

He explained that the rail seats would cost around £80 each – compared to £30-£60 for plastic seating seen in many grounds. The rail seats could allow clubs to provide between 10 and 20 per cent of a stadium’s capacity for standing and boost capacity in those areas by perhaps 80 per cent, bringing additional revenue to clubs.

Jon added: “If standing was not safe it would be banned at every ground in the UK.” League Two Morecambe’s new stadium is a mixture of seating and standing.

The FSF said that it was a complete myth that the Hillsborough Disaster was evidence of standing being unsafe. The Justice Taylor report primarily blamed overcrowding, poor policing and bad stadium layout, stressed the FSF.

Among the advantages of rail seats say the FSF are that it answers fans’ calls for choice, makes football more socially inclusive, counters problems of an ageing fan base and is safer than standing at lower-backed seats.

The Trust hasn’t taken a position on safe standing but we felt it was important to look at the case.

Trust chair Tim Hartley has made it clear that while safety must always be the first consideration but pointed to mainland Europe where the noise and camaderie of the traditional terrace had been kept while maintaining a safe environment.

You can visit the Safe Standing website at https://www.safestandingroadshow.co.uk 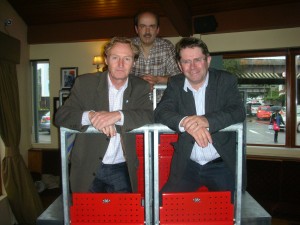 Jon Darch of the FSF is at the back with Tim Hartley, Trust chair (left) and Kevin Brennan, MP for Cardiff West, right.