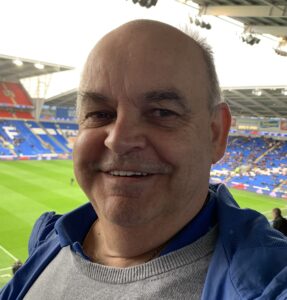 It is with deep regret that we have to report the passing of Trust board member Tony Holloway.

Tony, who joined the Trust board earlier this year, lived in Pontypridd and was an independent financial adviser.

Tony joined the board saying he wanted to see a stronger voice for fans in its relationship with the club and wanted to see better communications.

He was a Bluebirds fan for more than 50 years, watching his first match immediately after the European Cup Winners’ Cup Semi-Final v SV Hamburg in 1968.

Trust chair Keith Morgan said: “We are all absolutely devastated and stunned at the sudden passing of Tony who had been due to attend a board meeting earlier this week.

“Although Tony only joined the board earlier this year, he was already making a very valuable contribution to our work on behalf of fans. Tony was a loyal and fervent supporter of the Bluebirds who always wanted the best for the team. We offer our sincerest condolences to Tony’s family.”