The Jason And Rob Roadshow 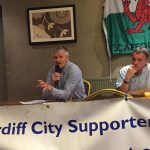 The Trust is delighted to confirm details of our fans’ forum with Bluebirds legend Jason Perry and BBC Wales soccer commentator, Rob Phillips.

After a gap of three years, the boys are back and looking forward to giving their views on all things Cardiff City.

The free event will be held on Thursday, June 16th, starting at 8pm with doors open at the Llandaff  Institute in High Street, Llandaff, Cardiff, from 7.30pm.

Trust Chair Keith Morgan said: “Members have really missed the annual fans’ roadshow so we’re delighted that Jason and Rob are once again fronting the event.

“This is a crucial time in the history of Cardiff City with finances really tight for the first time in many a year.  It will be fascinating to hear from Jason and Rob about how they think the Bluebirds will do in The Championship next season after a very tough 2021-22 campaign.

“Members will also want to know what they make of the signings so far and which players they think will stand out in 2022-23. Also, it will be interesting to hear from Jason and Rob about whether they feel the club’s directors need to engage more with fans and spell out to supporters their vision for Cardiff City going forward.”

Non-members are welcome at the roadshow where they can sign up for the Trust at the same time. It costs just £12 a year. Children’s membership is free.