We expect the race night at the Golden Lion in Penarth last Sunday to have raised more than £800, once all the proceeds have been received.

Apart from the racing and raffle, Jon Bassett, owner of the Golden Lion, donated the bar profits of £322 and on the night Camilleri Roofing kindly offered a donation of £50 to the appeal fund.

We’d like to say a special thanks to Trust member Gareth Jones from Penarth who organised the event, which was a huge success. Jon Bassett, who also runs the Ninian Park pub, continues to be a fantastic supporter of the appeal while landlord Paul Harper pulled out all the stops to make it such a superb fundraiser. 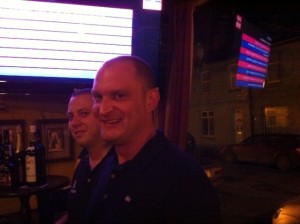 Fund project manager David Craig said: “We cannot thank Gareth, Jon and Paul enough for what was a tremendous event. It was also a good fun night as well as a great fundraiser.”