MPs Back Reform Of Football 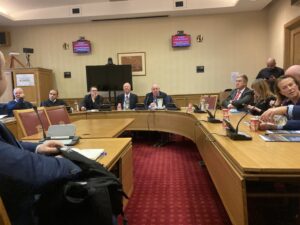 Strong support for turning the Fans-led Review of Football Governance into a White Paper was given at a London meeting of the All Party Parliamentary Group (APPG) for Football Supporters attended by Trust chair Keith Morgan.

“All politicians spoke very strongly in support of the report being converted into a White Paper ASAP. I pointed out that an imminent White Paper was needed to ensure Cardiff City club directors treat the report seriously enough to engage with us as a Trust.

“It was disclosed at the meeting that Liverpool, Manchester United, Arsenal, Chelsea and Everton already have fan advisory boards at their clubs and that Tottenham Hotspur will do very soon.

“The Sports Minister confirmed that, even if some wording adjustments are required to convert the Fans-led Review into legislation, its key contents and recommendations will definitely not be “watered down” or omitted.

After the meeting, Keith Morgan met Cardiff West MP Kevin Brennan who is very supportive of the work of the Trust.

“Kevin is hugely supportive of the Fans-Led Review and the work we do as a Trust. He wants to keep in regular contact with us on a frequent basis. He has a meeting with Secretary of State for the Department of Culture, Media & Sport soon and will be pushing for a speedy implementation of the White Paper.”

“We also have confirmation of support from Cardiff Central MP Jo Stevens and Vale of Glamorgan MP Alun Cairns.”

The Fans-led Review was set up in the wake of the bid by top English clubs to join a European Super League. It has promised a series of wide-ranging measures to give fans a greater say in their clubs.

Report on Fan-led Review of Football Governance One Year On can be viewed by clicking on the link: https://thefsa.org.uk/news/fan-led-review-crouch-the-time-for-reform-is-now/