Thanks very much to a couple more Trust members who have told us about their long distance support for the Bluebirds.

I’m a season ticket holder at CCFC, Grandstand Block 206. I live in SW London and get to, I would guess, 90 per cent of home games and London aways. Midweeks can be tough, but not impossible.

On a good day I can do it in 2.5 hours, but there ARE bad days. In fact, there’s a bloke
who sits near me and travels in from Ebbw Vale on public transport. He gets home at 7.00pm, whereas I can be home for 7.30. So, it’s Danny Baker on the way down then Call Rob on the way home (until Bath, when the signal fades and Sav takes over on 606). I’ll usually
check in to a cheeky local bistro I’ve discovered (Asda) for a bite with my brother before we head over to the game.

Neil Warnock said recently that he hoped Fulham would get promotion last season, but I’m glad they didn’t because it’s an easy 10 minute stroll from mine – and a nice place to watch football. It would be a neasy option on a more permanent basis, but you can’t chose your team.

I was taken to my first game at Estadio Ninian in the 68/69 season against Fulham. It was midweek and under lights. The dye was cast. City>were going well at the time in the old Second Division and it was that team that started “Davies, Carver, Bell, Sutton……” that people of a certain vintage can rattle off in their sleep. Inevitably, and as if to prepare me for the next 40 odd years (and there have been some ODD years), City lost 2 nil. It was Fulham’s only away win of the season as they finished rock bottom (their second relegation on the bounce).

Up top that evening were Toshack & Clark, still my favourite combination. I remember the morning my father showed me the back page of the Western Mail detailing Tosh’s transfer to Liverpool. I burst into tears.

We’ve had some fine teams since then. I fondly remember Jimmy Andrews’ team that came up from the 3rd in some style and Dave Jones’ side tha twas tearing up the second tier at the start of the ’06-07 season. Players? I’ve mentioned the big lad from Canton, but there was Ian Gibson then Alan Campbell in midfield. Willie Anderson could do it when >the mood took him. Phil Stant and Joe Dwyer would run through brick walls and Blakey had all the ability. As did Tony Evans and Adrian Alston, Bothroyd & Chops. I also think Kav would have got in to any of the teams I’ve seen at Cardiff.

Highlights? The draw against Palace in ’74 to keep us in the Second Tier and the win against Hereford in front of 35,000 a couple of years later to (virtually) take us back there. I also recall a 4-1 victory over Sunderland just after Xmas of ’73. City were already 1 down when we arrived but turned it around. All but the very young will remember that bizarre period when going to Wembley became almost boring, given that previous reasons to visit north London involved fixtures at Barnet.

The promotion night against Charlton was a catharsis, I suppose, but, let’s face it, the football (and other things) that year wasn’t brilliant. And, yes, I missed the Madrid game. Lowlights? Well, after a long mental editing process, I remember losing 2 nil to Leeds in the rain in the 5th round of the Cup (in front of50,000). Relegations seemed to come more regularly than promotions did
for a time and Alan Durban took the blame. The Durban years will probably come to be regarded as Cardiff’s Dark Ages, but the guy had nothing to work with. The club was in meltdown. I actually enjoyed the period when City were a fixture in the dungeon far more than I enjoyed some of the performances under Uncle Russ, which were just awful.

Controversially, perhaps, but I also didn’t enjoy our one season sojourn in the promised land of The Premiership. We weren’t wanted there and the club became something of a laughing stock. I remember being in a pub in Chelsea after the game there and some local fans were pointing at the then club crest in the match day programme and wetting themselves with laughter. The worst thing was, I agreed with them.

So, here we are in 2017/18 and Warnock’s City have gone off like a train. I doubt it will last (hey, I’m a City supporter) but you never know. City and Fulham to go up? 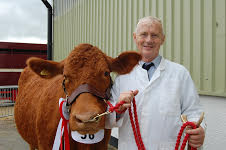 Richard Hartshorn, pictured with one of his prized cows he shows, is another Trust member clocking up the miles to follow the Bluebirds.

He said: “I live in Shropshire. I’ve been a Bluebird all my life even when I lived in Scotland and have been going there from the days of Ninian Park being over-full to queing to seeing them play Hereford United.

“I missed the whole of the first half of the Hereford game in the queue. I finally got in at half time and was lucky to be by the goal where City scored the goals to win the game.”

If you’re a Trust member and a long distance fan we’d be delighted to hear from you. Email members@ccfctrust.org