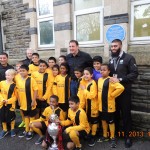 Malky with the school team at Stacey. Championship trophy at the front

Cardiff City manager Malky Mackay this afternoon officially unveiled a blue plaque dedicated to Fred Keenor at the school where he was a pupil.

Malky spoke about the achievements of the hero of the 1927 FA Cup winning team, who attended Stacey Primary School in Roath, where he captained the school team.

Club officials also brought along the Championship trophy won by the Bluebirds last season and Malky posed for photographs and signed autographs.

Fred Keenor project manager David Craig, who is a board member of Cardiff City Supporters’ Trust, spoke at the unveiling along with John Dixon, who chairs the governors at Stacey.

Representatives of Fred’s family attended the event, along with members of the Cardiff City Supporters’ Trust and parents.

David Craig said: “Cardiff City Supporters’ Trust would like to thank Malky for giving up his time to unveil the plaque. I know everyone at Stacey, both pupils and teachers, were excited to see Malky.

“I’d also like to thank the club for bringing the Championship trophy along and to head-teacher Jo Colsey and her marvellous staff for their support. It was a great occasion.”

The money to pay for the blue-style plaque came from the remaining proceeds of the Keenor statue appeal. After its purchase David Craig said there would just enough left in the appeal to pay for the statue’s first annual clean and overhaul.

You can also read a report of the unveiling on the BBC Wales website https://www.bbc.co.uk/news/uk-wales-south-east-wales-24911232 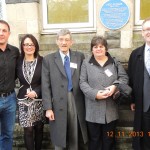 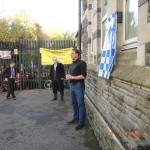 Malky speaking before the unveiling

Malky after the unveiling