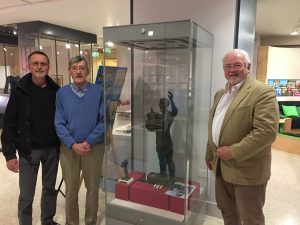 Roger Andrews (right), sculptor of the Fred Keenor statue, has visited the exhibition at the Cardiff Story Museum in the basement of the Old Library, The Hayes, where his 3ft maquette has gone on display.

Roger was joined by Fred’s nephew, Graham Keenor (middle) and David Craig, vice chair of the Trust, who was the project manager on the statue appeal which raised £85,000 for the full size statue, which stands proudly outside the Cardiff City Stadium. The statue will have been in place for five years this November and it has become a focal point at the stadium.

The exhibition dedicated to the 90th anniversary of the FA Cup win runs until September. There are displays in five cases and more cases to be added, so worth a quick visit for any City fan wanting to see some great memorabilia. The 3ft maquette is normally on display inside the stadium.