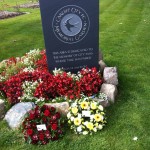 The Trust was represented when the Garden of Remembrance at the Cardiff City Stadium was dedicated and declared officially open before the Blackpool game today.

The dedication was carried out by Rev Dr John Weaver, the club chaplin while Alan Whiteley responded on behalf of the club.

After the short ceremony was complete, club officials laid a commemorative wreath to Bluebirds fans while another was laid in memory of the Liverpool supporters who lost their lives at the Hillsborough Disaster.

The football club, the Trust and supporters’ club all contributed to the costs of creating the garden.