FRED KEENOR STATUE: A GLIMPSE AT THE FUTURE 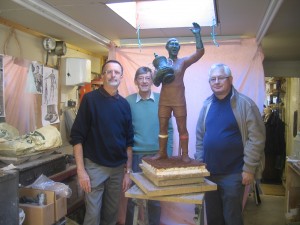 Once finished next month the statue will taken to events to give fans a glimpse of how the final tribute will look while at the same time promoting the fundraising appeal.

David Craig, Graham Keenor and Phil Nifield, members of the fundraising committee, visited Roger at his studio in Llantwit Major to look at progress being made.

Project manager David Craig said: “We wanted to see take a look at the work on the 3ft statue and were very impressed with what we saw. It gives a good indication of how the final statue will look and Graham was particularly pleased with the likeness of his uncle.

“The statue will look fantastic when erected outside the Cardiff City Stadium and motorists will be able to see it as they drive along Leckwith Road.

“We now have to continue our fundraising efforts and would urge people across Wales to get behind this campaign. With your help we can turn this into a reality. We’d really like to see businesses coming on board to back this grassroots campaign, something they haven’t up to now. If they were prepared to give generously then this statue could be erected much quicker.”

The final statue of Fred Keenor will stand between eight and nine feet high resting on a plinth.

Roger Andrews was the artist who created the Sir Tasker Watkins statue which stands proudly outside the Millennium Stadium.