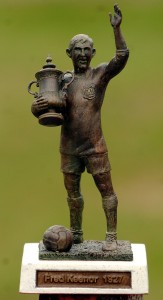 FIGURINES of the Fred Keenor statue that will stand proudly in front of the Cardiff City Stadium have been made by artist Roger Andrews.

Five specially numbered pre-production miniatures will be sold separately by auction to raise money for the statue appeal. No 1 will be sold at the fundraising evening starring Ricky Tomlinson on Thursday, September 16th. City manager Dave Jones will also take part in a question and answer session with guests at the Cardiff City Stadium on the night.

The rest of the figurines, which stand 10 inch high and cost £39.99, are available at the Cardiff City Stadium Club Shop  and can also be purchased at the fundraising message-boards football match on Sunday, August 22, at the Under-16s pitch opposite the stadium.

More information on obtaining the miniatures can also be obtained by contacting Fund Press Officer Phillip Nifield on phillip.cattwg@btinternet.com.

David Craig, project manager for the scheme who is also a board member of the Cardiff City Supporters’ Trust, said: “We are delighted with the quality of the figurines and we are sure that fans will feel the same. You really have to see them at first hand to appreciate how good they are.

“We’re sure they will prove very popular and expect them to be snapped up quickly. We have only ordered a limited number and we hope many people may take the opportunity to buy them as early Christmas presents for their loved one’s.”

Roger Andrews, who has been commissioned to create the statue, also produced the statue of Sir Tasker Watkins outside the Millennium Stadium.

Donations to the appeal fund can be made through the Co-operative Bank:Account name: –   Fred Keenor Statue Fund or FKSFAccount no 65392368 Sort Code     08-92-99.Cheques can also be sent c/o CCST to PO Box 4254, Cardiff, CF14 8FD. Please add the words “Fred Keenor Appeal” on the top of the envelope.
Football Match

A football match between supporters who use Annis Abraham’s Message Board (AAMB) and those that post on Mike Morris’ board (CCMB) in aid of the Fred Keenor Statue Fund Appeal kicks off at 2pm on Sunday, August 22, on the under-16’s pitch at Leckwith, opposite the Cardiff City Stadium. Team photographs will be taken at pitch side at the stadium at 1pm with the sides having use of the changing rooms. The presentation of trophies and a raffle draw will take place after the game.

Statue fund project manager David Craig said: “We want to thank those that have put a great deal of work into this match. We hope that other supporters will follow her lead and organise their own events – it can be a jumble sale, coffee morning, whatever you want to do.”