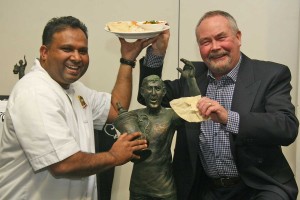 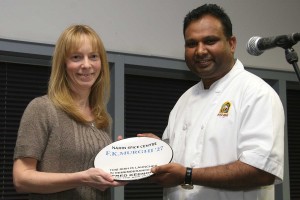 Tracey Marsh,Trust vice chair of the Trust, being presented with a special plate by Dilwar Ali at Frank Hennessy night. Picture by Deryck Lewis

More than 120 fans turned up at the Cardiff City Stadium on Thursday night to support the appeal to raise £85,000 for a statue in aid of Fred Keenor.

Cardiff’s very own Frank Hennessy, who waived his fee, was the star of the evening with a mix of stories and music to delight the audience.

Before Frank stepped on stage, Dilwar Ali of the Nahin Spice Centre in Caerphilly Road, Cardiff, had earlier served up his usual excellent curry while the evening ended with a raffle.

Dilwar also created a special curry dish called FK Murghi ’27 for the evening. It is now on the menu at Dilwar’s takeaway and £1 will be donated to the appeal when one is bought.

Julie Morgan, the Cardiff North AM, and Mark Drakeford, Cardiff West AM, who have lobbied the Welsh Government on behalf of the appeal, were among those attending along with former First Minister of Wales, Rhodri Morgan, Ex-Assembly Minister Sue Essex, former Vale of Glamorgan MP John Smith and councillors from Caerphilly and Cardiff.

Around £4,000 needs to be raised to trigger a £15,000 contribution from Cardiff Council which would take the total raised to £60,000. That would allow artist Roger Andrews, who was also present, to officially begin work on the statue.

The fundraising committee would like to give special thanks to Frank Hennessy for giving up his time and entertaining everyone so brilliantly, Dilwar Ali, Jon Bassett and Graham Keenor for donating prizes for the raffle and, of course, to all those who supported the event. Thank you all.

We’ll update you soon on how much was raised at the event.