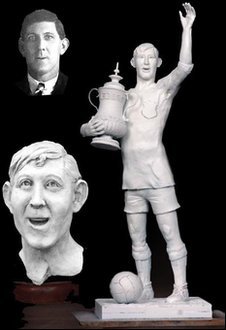 The Fred Keenor Statue Committee is delighted to announce that the South Wales Echo will be backing the campaign to raise funds to erect a statue in honour of the captain of the 1927 FA Cup winning team.

David Craig, who is project manager for the appeal, said: “We’re really delighted that the Echo has agreed to support the campaign by publicising the  efforts to raise the around £85,000 needed to meet the cost of the project.

“We have already received £1,000 from the Trust and a pledge of £15,000 from Cardiff council but the official fundraising will be kicked off on Friday, April 23rd – the 83rd anniversary of the famous FA Cup Final victory.

“We’ve started writing to local businesses and other organisations to ask for their support but the key to our success will be the support of individual fans of Cardiff City in South Wales, across the UK and the world. They can make it happen.

Graham Keenor added: “Fred was a Cardiff lad so I’m really pleased that the Echo, which has been an integral part of city life for more than a century, is getting behind our campaign. The  Echo has reported on the ups and downs of Cardiff City over the decades and remains a popular read for many Bluebirds fans.

“We believe the efforts of Fred and the rest of the 1927 team have not received the public recognition they deserve. We aim to put that right.”

Donations can be made to: