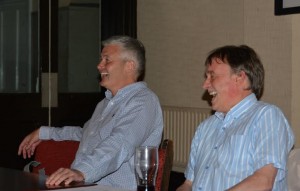 Bluebirds legend Jason Perry pulled no punches at a Trust fans’ forum -declaring the club needed to change at the top.

Jason was the guest at the forum that followed the AGM. BBC Wales’ soccer commentator Rob Phillips chaired the evening.

The former City skipper highlighted the failure of the replacement of a largely defensive and organised manager Malky Mackay by the attack-minded Ole Gunnar Solskjaer.

He pointed to the work of Huw Jenkins, chair of Swansea City, who had found replacement managers to fit in with the style of play that the club had endorsed. Jason also highlighted a similar philosophy at Southampton, which had proved hugely successful. He said that everyone involved at Southampton from the top to the bottom were pulling in the same direction.

Jason said that the current manager Russell Slade had a difficult time having had to slash the budget, moving players out and had done all that was expected of him. He praised the work of coach Paul Trollope, who he described as excellent.

Rob Phillips said the summer ins and outs were crucial to the future with the huge Premiership TV deal coming into operation the following season. “Vincent Tan has big decision ahead this summer -does he continue with austerity or put money in to try and get up.” 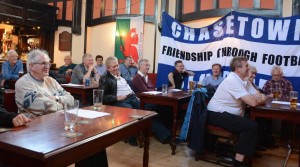 Both said that it was important that Scott Young stayed- even if there was a change of manager – because of his knowledge and love for the club. Stability was crucial.

Jason Perry said that the club needed to do more to get fans on board and talk to them about its vision for the future, something which the Trust has also argued.

Trust chair, Tim Hartley, thanked Jason and Rob for once again giving up their time to talk to fans. Thanks also to Brian Mertens for the pictures.