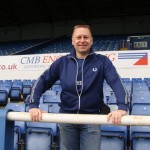 Keen amateur photographer Mark Watkins has captured the Cardiff City’s final season at Ninian Park through his camera lens – and the Fred Keenor Statue Appeal will snap up the profits.

Our Ninian Park, which features more than 250 colour photographs along with a history of the ground, memories from fans and a foreword by former star striker Carl Dale, is being launched at the Millwall game on March 31.

Mark and Cardiff City Supporters Club (CCSC) have kindly agreed that all profits from the book will be donated to the Fred Keenor Statue Appeal.

Mark, 46, who is vice chair of CCSC, said: “I’ve been a keen photographer for a few years and decided to take as many pictures as possible during Ninian’s last year to preserve it just as it was in its final days. I suppose the book itself was a labour of love – our new stadium is fantastic and is just what we needed to progress as a football club, but it’ll never quite replace the affection I felt for Ninian Park.

“The weekend’s spent on the sparse terraces as fans deserted us in droves and the club lurched ever closer to oblivion were I suppose character building to say the least, but I loved the place and it’ll forever feel a part of me.”

Mark’s father first took him to Ninian Park in December 1973 when he was eight-years-old when City beat Sunderland 4-1 with Alan Farrington getting a hat-trick.

“He started taking me regularly during the 1975-76 promotion season and I’ve been watching Cardiff ever since. I was a regular at home and away games during the dark days of the 1980’s and 1990’s, so to be able to see Cardiff play at Wembley in two major cup finals in recent years has been a dream come true and shows the fantastic progress made by the club.”

Cardiff born and bred Mark lives in Caerau and works as an IT systems analyst in the legal sector. He has been a committee member of CCSC since 1991 and also presents the Cardiff City Phone-In on GTFM every Wednesday.

David Craig, project manager of the Fred Keenor Statue Appeal, said: “This is a fantastic gesture from Mark and CCSC and I urge fans to buy what is an excellent photographic history of the last season at Ninian Park – and help the appeal reach its target of £85,000.” The appeal has so far raised just over £70,000.