It’s now been finished and gives fans a good idea of what the final tribute outside the Cardiff City Stadium will eventually look like? 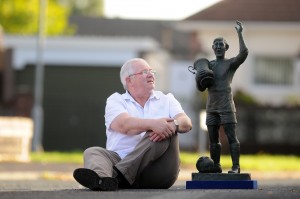 The statue formed part of an exhibition on Fred Keenor at the Football Association of Wales’ awards dinner which members of the fundraising committee put on. The committee is now arranging a suitable location to display the three-footer.

The final statue of Fred Keenor will stand around 8ft 6ins high resting on a plinth on a triangular piece of land opposite the Gate 3 entrance into the stadium and because of its location will be seen from Leckwith Road.

Roger, who is from Llantwit Major, created the Sir Tasker Watkins statue  outside the Millennium Stadium.

Cheques can also be sent c/o CCST to PO Box 4254, Cardiff, CF14 8FD. Please add the words “Fred Keenor Appeal” on the top of the envelope.