A Night of Memories 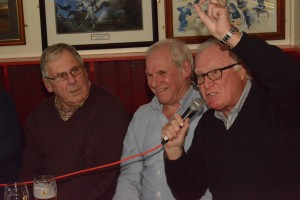 The clock was turned back to the 1970s when the Trust organised an event of football chat and film at the Rose and Crown pub, Graig, Pontypridd.

The idea for the event on Thursday, January 21, came from Richard Shepherd, Cardiff City’s club historian and was taken forward by the Trust board. David Craig, the Trust’s vice chairman, undertook the work necessary to ensure the event was a success.

Richard had uncovered some film at Ninian Park which everyone thought was lost. The film showed City’s games from the 1969-70 and 1970-71seasons and it was part of the Match of the Day programmes from that period.Richard had the film converted into CDs and these were used at the event.

Peter Jackson, the South Wales Echo’s Cardiff City reporter during those years and players Gary Bell, Bobby Woodruff and Leighton Phillips were contacted to invite them to attend. They all accepted without hesitation. This is an indication of the comradeship that still exists between them.

On the night Richard Shepherd introduced and commented on the film and invited Peter and the players to share their memories of the particular games shown and of life under manager, Jimmy Scoular, in general. As you can imagine this resulted in many tasty, hilarious anecdotes. Everything theplayers said demonstrated clearly how attached they were to Jimmy and to The Bluebirds.

David Craig thanked all those involved in making the night such a success and offered special thanks to Chris (Snowy) Insole and his staff at the Rose and Crown. The venue with its new, large screen was ideal for the event. Chris also provided refreshments free of charge. David also said that throughout the build up to the night Chris was always available and prepared to help and that this showed that he is a true friend of the Cardiff City Supporters’ Trust.

Thirty-five people turned out on a wet and windy night and David finished by thanking all Trust members who turned out on the night to support the event. A raffle was held which raised £82 for the Trust. It had been a night of good memories.

The photographs were taken by Trust board member, Brian Mertens.