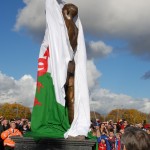 Standing proud at the Cardiff City Stadium is the 15ft high tribute to Fred Keenor, captain of the Bluebirds’ 1927 FA Cup winning team.

Hundreds of fans gathered around the statue to see Carla Shore and Yassin Mohamed, pupils from Fred’s old school, Stacey in Roath, pull a cord to release a Welsh flag and unveil the statue.

Earlier David Craig, board member of Cardiff City Supporters’ Trust and the project manager, thanked all supporters of the statue vappeal, particularly Bluebirds fans. He was followed by Lord Kinnock and Steve Borley, a director of the football club, who both expressed their delight at the unveiling. 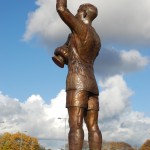 Reaction to the statue designed by Roger Andrews was very positive and the unveiling marked the culmination of more than two years of fundraising.

Thanks to everyone that made this dream a reality. 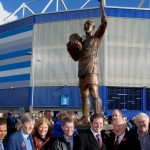 Some of our guests at the unveiling

You can also read a BBC report on the unveiling at https://www.bbc.co.uk/news/uk-wales-south-east-wales-20276271

All pictures by Trust board member Brian Mertens