We’re delighted to announce that the Trust has raised a total of £2,233 for @TheWallich, the charity that helps homeless people in Cardiff and across Wales.

Apart from the Manchester United match-day bucket collection which brought in £1,783, the Trust raised £300 from a quiz organised at The Arches pub in Llanishen. The Trust also made a donation of £100 and £50 was raised from a raffle at our annual general meeting.

We all see daily the impact of homelessness on the streets of our cities and towns so we’re pleased to have been able to help the vulnerable in a small way.

Thanks to everyone that contributed and to Cardiff City Football Club for supporting a bucket collection at the Manchester United game.

If you would like to find out more about The Wallich you can do so on www.thewallich.com

A bucket collection in aid of the Trust’s supported charity, The Wallich, raised £1,734 for its work with homeless people.

The collection before the Manchester United game was generously supported by Cardiff City fans attending the big game.

Michael Cowley of The Wallich wrote to Cardiff City and The Trust following the collection.

He said: “I am really pleased to let you know that we raised £1,734.69 which is an amazing amount for us as it will prevent around 50 instances of rough sleeping in Cardiff by paying for 50 bed spaces at our Cardiff Nightshelter.

“Thanks again to everyone at the club and Trust for providing this opportunity – we really do appreciate it and it will make a real difference.”

Happy New Year From The Trust

We at the Trust hope that everyone had a great Christmas and will have a happy and healthy New Year.

The club has had a great finish to 2018 with an away draw at Crystal Palace and a superb win at Leicester. Next up is Spurs, which will be tough, but who knows what can be achieved with the spirit in the CCFC squad.

One constant throughout the season to date has been the brilliant support of the fans, both home and away, even when the team has struggled on the pitch. This has been acknowledged by the team and the whole club as a huge contribution to the fight to keep the club up in the Premier League and will continue to do so for the rest of the season.

Again , Seasons Greetings to everyone. 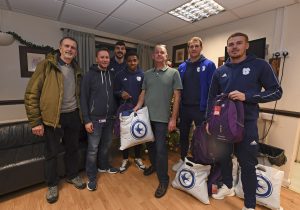 Recent home victories have been celebrated at the end of the game by a light show emanating from the stadium floodlights mounted on the stands.

One of our Trust members raised the issue of the potential impact of the display on him, and others like him, as a light sensitive epilepsy sufferer, so we discussed the matter with the club, whose prompt and helpful reply can be summarised as follows.

When the lighting system was being designed for installation, the club had an expert`s report commissioned to ensure that the lights would not cause such a problem. The report, written by a FIFA,UEFA and Premier League approved expert, concluded that the frequency of the flashing lights being used by the club would not have a stroboscopic effect which might lead to problems with epilepsy.

In addition, as a “failsafe”, the club has positioned warning notices at turnstiles and in concourses stating that flashing images and lights might be used in the stadium.

We have asked the club to also ensure that prominent messages are also relayed via the stadium big screens by way of similar notification.

You may have already seen that the Club will be subsidising coach travel for members of the travel group for our away fixture vs. Watford on December 15th. Further information here >> https://www.cardiffcityfc.co.uk/news/2018/november/watford-vs.-cardiff-city-subsidised-travel/

We have also agreed reciprocal pricing for this fixture >> https://www.cardiffcityfc.co.uk/news/2018/november/away-days—ticket-news-watford-vs.-cardiff-city/

The club will be paying a £600.00 subsidy for each coach travelling to Watford.