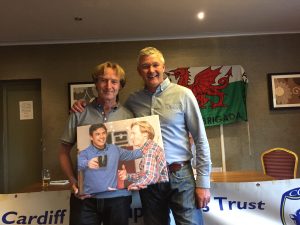 Trust chair Tim Hartley was presented with a picture by Bluebirds legend Jason Perry to mark his seven years in the role.
The presentation to Tim, who stepped down as chair at the annual general meeting, was made during a fans’ forum at the Three Arches pub in Cardiff.
Jason and Rob Phillips, BBC Wales’ soccer commentator, took questions from Trust members on issues ranging from Joe Ledley and his participation in the Euros, through to the possibilities for manager and the lack of game time for Declan John.
A free raffle was held for members with Dai Hunt winning a signed Cardiff City shirt. 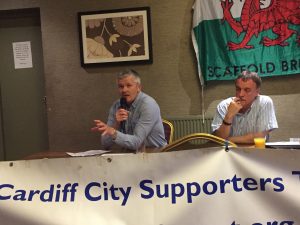 The Trust would like to thank both Jason and Rob for once again giving up their spare time to attend the fans’ forum.